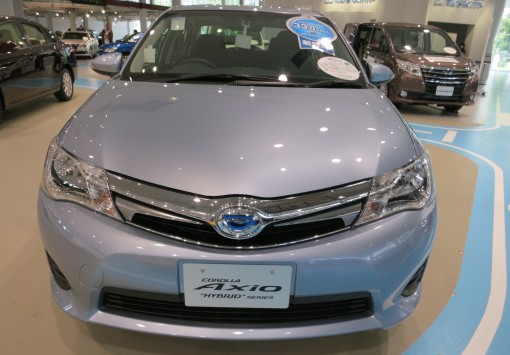 The Toyota Corolla Axio is the flagship sedan of Toyota Motor Corporation in Japan. The car provides outstanding cruising and environmental performance. Toyota Corolla Axio has adopted a light weight, high rigidity body that seeks both a quiet cabin and superior aerodynamic properties.

The key components of the front and rear suspensions has also been optimally tuned to provide brisk maneuvering and cruising stability, as well as a comfortable ride. The Corolla Axio feels stable even at maximum speed at the highways with great fuel consumption.

The Axio name is acquired by the tenth-generation Corolla sedan that was launched in October 2006. Its body design, while retaining the general image of the previous model, won the 2007 Good Design Award.

The Axio has a fuel efficiency of 17.2km/l. An Eco Drive Indicator lights up when the vehicle is being efficiently operated to raise the driver’s awareness of environmentally considerate driving and contribute to higher fuel efficiency. Inside the cabin the backseat floor hump has been minimized to create flat surfaced legroom enabling three adults to sit in the rear comfortably.

All models of the Corolla Axio came standard-equipped with a rearview monitor, allowing the driver to see what was behind the car to facilitate reverse parking. The engine was either a 1.5-liter VVT-i (1NZ-FE) producing 110 PS (105 PS with 4-wheel-drive [4WD] model) or a 1.8-liter Dual VVT-i (2ZR-FE) developing 136 PS (125 PS with 4WD model). A Super CVT-i type transmission was adopted for both engines, with a difference that the 1.8-liter model came with a 7-speed sequential gearbox. In April 2010, the 1.8-liter engine was upgraded to the 2ZR-FAE with valvematic mechanism that offered better fuel economy.

From a stop, the Corolla Axio’s acceleration is very remarkable. It’s a quiet cruiser during highway driving, with very little engine noise and even less wind noise. Though not as sporty as some competitors, Toyota Corolla Axio offers an appealing compromise between handling and comfort. It rides smoothly enough to be used as a commuter car, while maintaining its composure when occasionally pushed around the corners.

A “corolla” is the ring of petals around the central part of a flower. “Axio” comes from the Greek word “axia” (“value” or “quality”).