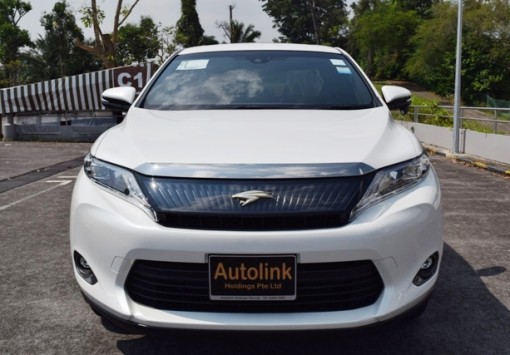 Toyota Harrier 2.0A Elegance with Sunroof/Moonroof

The All New 2014 Toyota Harrier Elegance/Premium brings the luxury, functionality, and power you expect from the brand’s high-end line down with a lower price-point. It has a long front and short rear overhangs that adds a streamlined dynamism to the side profile. The dramatic curve of the front bumpers toward the rear creates a powerful, compact front end, while the deeply chiseled front face makes the new Harrier instantly recognizable.

Price starts from $148,888 for Elegance model. Terms and conditions applies.

Available in Grand, Elegance, Premium model. Grand model is temporarily out of stock till further notice.

The Harrier brings the luxury, functionality, and power you expect from the brand’s high-end line down with a lower price-point.

Toyota Harrier has always been an elegant and luxurious model and this time it’s no different. The new Toyota Harrier 2.0a Elegance looks astonishing, with new grille that have a Harrier logo and very long laid-back headlights in front of the long and powerful hood. There is no need to describe Harriers Elegance’s interior as luxurious, it is implied as default. Fine cloth, fiber and leather upholstery, coupled with soft plastics and wood grain touches simply leave you in awe.

The new Harrier Elegance is not based on the current Lexus RX. Instead, it employs the 2660mm-long platform of the RAV4/Vanguard, with the same 190mm ground clearance. The Toyota Harrier Elegance looks sharper than its two crossover cousins, with Toyota describing the exterior design as “elegant velocity”, which is about as meaningful as “wild but formal”. It’s certainly a handsome machine, especially in businesslike black, or better still, color code 220 – Sparkling Black Pearl Crystal Shine. Said paint job is indeed shiny, and it sparkles.

Even though the chrome appliques above the unusual grille and along the lower portion of the doors look heavy-handed compared to how Lexus designers would apply chrome trim on a crossover, they’re neither excessive nor offensive.

Inside the cabin, Harrier the hawk (logo) is on the hunt for your attention – open a front door and the name is illuminated on the door sill; close the same door and you’ll spot the hawk perched on the door panel trim; start the engine and both “Harrier” and the hawk fly into view between the instrument meters.

The equipment is suitably premium, and includes electrical adjustment of the driver’s seat and steering wheel, computerized climate control with fingertip “touch” operation, convenient cruise control, a powered tilt-and-slide moon-roof, a powered tailgate, and express up/down for every power window. Each window also stops closing automatically if it detects a hand or arm in the way – Toyota claims this is world-first technology, but maybe it’s referring to how the window detects an obstacle in its path.

Another safety feature is Lane Departure Alert (LDA), which notifies the driver (with a buzzer and a warning light) if the Harrier deviates from its road lane. The system even applies a gentle counter-force to the steering wheel to “wake” the inattentive driver.

On the move, it’s obvious that the Harrier has a hardworking 4-cylinder engine. It’s vocal when stretched, but that’s no surprise. What’s surprising is the remotely sporty tone when the engine revs go above 4000rpm. The car’s CVT (continuously variable transmission) is tofu-smooth in its operation, but a bit bland (like said protein food) if you’re used to sensing the gear changes of a traditional automatic gearbox. The CVT has a “PWR” mode that sacrifices some refinement and fuel efficiency for livelier pick-up, which is useful if the Harrier man is in a hurry.