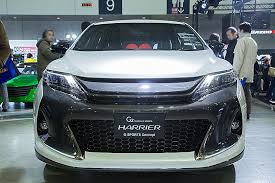 Previewed by the Harrier G Sports concept, the production model has a sporty front fascia with revised Grille and Chrome accents. The crossover also has a rear diffuser and a sport-tuned suspension that reduces the ride height by approximately 35mm. Other notable highlights include a chrome exhaust tip and 19 inch aluminium wheels with black accents.

Power is provided by a 2.0-litre four cylinder engine that develops 151 PS (111kW) and 193 Nm (142 ib-ft) of torque. It is connected to a Super CVT-i transmission which can be paired to an optional all-wheel drive system.

Elegance G’s is based on the Harrier G Sports concept. However, the production model features more athletic design due to its revised grille and chrome accents.

2015 Toyota Harrier Elegance G’s Car can also be called as piano accent car. Why? It might look like piano, but it does not necessarily imitate piano’s form. The thing that is inspired by piano is the color choice. Although it is common for the color choice of black and white in any car, the colors are designed perfectly well in this car. It makes you think that it seems like a piano upon looking at it.

For you to know, this car is said to have sporty style as it is abbreviated as “s” in “G’s”. Sporty style did not mean it is low and meant for two people only. Based on its side image, there are two doors on each side, so this Toyota Harrier Elegance G’s Car should have been meant for four passengers. Furthermore, although it has been lowered to the ground for around 35mm, it is not as low as the usual sporty cars.

From the front look, you will see that 2015 Toyota Harrier Elegance G’s has wide bumper and headlights which look like sharp-looking eyes. While from the back look, there will be two separate taillights and chrome exhaust. Moreover, you will also have aluminum wheels for around 19” to complete the appearance of 2015 Toyota Harrier Elegance G’s. People call it a handsome car due to all the things it has on its look.

Once you are done looking at its look, then it is the time for you to learn about its specification. Not that much spec can be found on the internet for this car is just about to show in the Japan’s Tokyo Auto Salon 2015 around the end of upcoming January. The one that is clear enough is the information about the engine used here. It uses four-cylinder engines that have capacity for around 2.0 L.

The engine in this 2015 Toyota Harrier Elegance G’s can produce 151hp force and 193Nm torque. They are also said to work together with the transmission system called Super CVT-i. These engines and systems surely will offer you a high performance that can even surpass standard cars.

The car also received new rear diffuser to make things a little sportier. In addition to this, Toyota has decided to lower the car 35mm closer to the ground via a sport-tuned suspension.

Also worth the mention are the chromed exhaust tip and the 19-inch aluminum wheels with black accents on which the car runs. Other improvements of body stiffness include floor rigidity parts and spot welding point as well as front calipers and new brakes.

Inside, the sporty styling theme is continued via the three-spoke sport steering wheel, sports seats and the carbon fiber trim. There are also piano black accents, contrast silver stitching and Elegance G’s budging on the instrument panel and center cluster panel.