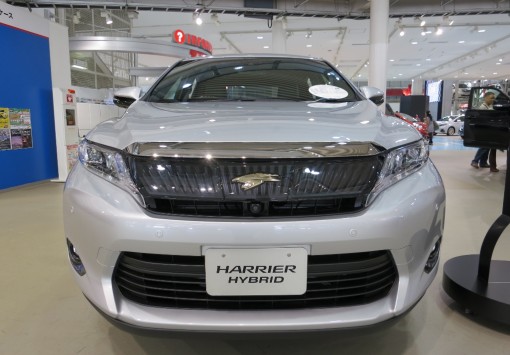 The All New 2014 Toyota Harrier Hybrid brings the luxury, functionality, and power you expect from the brand’s high-end line down with a lower price-point. It has a long front and short rear overhangs that adds a streamlined dynamism to the side profile. The dramatic curve of the front bumpers toward the rear creates a powerful, compact front end, while the deeply chiseled front face makes the new Harrier instantly recognizable. Available in Grand/Elegance/Premium package.

The Harrier Hybrid has a natural feel of excellent compatibility with an HV, considering its interior which has a style that is advanced, futuristic, and sparkling. Its hybrid system was produced by adding front and rear motors to the inline four cylinder 2.5 liter engine. This driving system is called the E-FOUR and it is being adopted to the Estima and other models. It is an electronic 4WD with a direct motor that drives the rear wheels and it does not have a propeller shaft.

It is a 4WD when it starts, while it is accelerating, or when the front wheel slips. However, its status becomes FF when it is running normally contributing to fuel efficiency. The biggest difference is that the Harrier Hybrid has the option of being prepared with an active 100V/1500W (100V/100W for gasoline models) electrical outlet for accessories that can be used during outdoor activities and/or disasters.

The system output is 194ps. It also has an allowance for engine displacement and it greatly surpasses the 151ps of 2 liter gasoline powered vehicles. Its fuel efficiency is the best of its class with the maximum of 21.8 km/liter.

Toyota Harrier Hybrid has an extraordinarily high level of engine silence when running which is typical to luxury cars. Although the noise that an HV produces during braking can be quite loud due to the output of its powerful motor. The 17 inch tires mounted to the vehicle contribute to a flat and extremely pleasant riding experience. With a torque key that is typical to an HV that has a strong motor torque sensation, its ultra-smooth power efficiency which is unique to hybrid models has become its charm. The EV whose weight was set to 1750-1800kg, features a vast travelling range. During cruising speed, there are instances where it automatically converts to EV running (also features EV mode).

However, depending on the road surface, Harrier Hybrid is also possible to sense a luxurious riding feel with regards to the premium grade vehicles that are equipped with 18 inch tires. It appears that the model which has a good suspension compatibility, and offers a gentle riding quality overall is the one equipped with 17 inch tires.

Fuel consumption of Harrier Hybrid is at 70 percent during high speed. But when you are driving it at a relaxed manner of 30 percent in town areas, the actual fuel consumption is around 15km/liter at most.